This is how much e-waste Germany produces each year

Around 1.9 million – that’s how many tons of electrical appliances were put into circulation in Germany in 2015 alone, with large household appliances such as refrigerators or washing machines leading the way (816. 664). For comparison: This corresponds to about a third of the cars produced in Germany in the same year (5.75 million). It’s no wonder that e-waste is currently one of the fastest growing waste streams worldwide and within the EU. Even electronic waste in Germany is a major burden. But how much old electrical equipment is actually disposed of in Germany?

In this article, you will find out whether Germany lives up to its title as “Recycling World Champion” when it comes to e-waste. 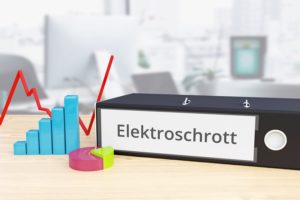 While German consumers separate almost 80% of glass and plastic from other residual waste, the return rate for the disposal of electronic devices is rather sparse. In order to better measure the annual amounts of electronic waste in Germany and to be able to compare the figures with each other, statisticians divide the electronic waste produced in Germany into several categories:

Figure 1: Electronic waste collected per capita and by country (2015) 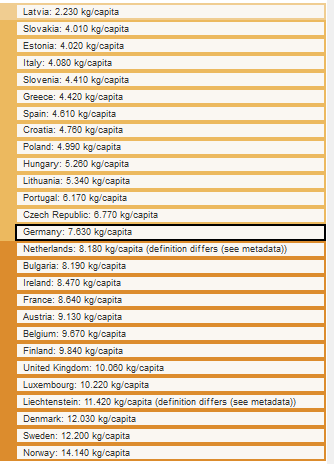 In Germany, compared to countries such as Italy or Malta, a relatively large proportion of the electrical devices previously brought onto the market are collected at the return points, but there is still plenty of room for improvement in terms of proper disposal, taking electronic waste recycling into account in Germany. as shown in the image below.

Unfortunately, it often happens that broken electronic devices are not repaired, but instead consumers decide to buy new ones and electronic waste is created in Germany. It is also not uncommon for old but still fully functional devices to be replaced. The reason for this is usually the desire for a newer, better or more modern device. What is now common practice with televisions and smartphones can have fatal consequences from an ecological point of view. Electronic waste in Germany and electronic waste in general worldwide contain not only numerous recyclable materials, but also a number of toxic and environmentally harmful substances. This makes e-waste a hazard worldwide.

For this reason, it is of enormous importance that the distributors of electrical devices are aware of their manufacturer responsibility within the meaning of the ElektroG (ElektroG) and ensure that the old devices are properly disposed of.

Deutsche Recycling GmbH can help you with this: Find out more now!

WEEE Directive and Exports: Why do you need a representative according to the WEEE directive when you export?
16. December 2022

International Regulations when Exporting from Germany – You Must Comply with these Regulations
16. December 2022
Webinare
Interesting topics:
Search:
Latest from our Blog:
Go to Top
Free Guide - Take back & recycling in E-Commerce

Are you interested in learning more about the latest trends and insights of the extended producer responsibility? Our whitepaper “Take back & recycling in E-Commerce” is the perfect resource for staying up-to-date and ahead of the competition. From WEEE registration to packaging regulations, this comprehensive guide covers everything you need to know. Don’t miss out on this valuable opportunity to enhance your knowledge and advance your career. Click the button below to download your free copy now!