On June 11th, 2021, the German  parliament passed the Supply Chain Due Diligence Act (LkSG) – also known as the Supply Chain Act. The new German Supply Chain Act, which will come into force on January 1, 2023, primarily focuses on human rights issues, but also includes environmental considerations. We would like to give you an overview about what this law means for your company and how the new supply chain law is related to the existing environmental compliance regulations.

In its draft law for the new supply chain law, the legislature refers to the increasingly complex economic structures of medium-sized and large companies. Due to its particularly pronounced international interdependence, Germany as a business location has a key responsibility to protect human and environmental issues beyond its own national borders.

Since the Federal Republic naturally only has legislative sovereignty in its own national territory and consequently cannot pass laws for other countries, the new supply chain law goes through the companies based in Germany and their area of ​​responsibility. The basic idea here is as follows: The companies concerned are instructed to check their supply chains to see whether individual suppliers or sub-dealers violate certain human or environmental regulations. As a result, according to the idea of ​​the new supply chain law, market participants who violate these provisions should either withdraw from the market or adapt to the set rules of conduct.

What does the new supply chain law say?

In order to implement the stated goals, the new Supply Chain Act is roughly based on three regulatory areas:

In accordance with the new Supply Chain Act, for example, affected companies have to adopt a declaration of principle on respect for human rights for their own business area and for direct suppliers and carry out a procedure in which the extent to which the company could contribute to human rights violations is analyzed. A risk analysis for indirect suppliers, on the other hand, only needs to be carried out if there is a specific suspicion of an injury.

What is to be understood as a violation here is defined in Section 2 of the Supply Chain Act as the creation of a human rights risk. In particular, according to the new Supply Chain Act, such a situation exists when a company employs children as workers or endangers the health of the population due to improper waste management.

If risk areas are identified as part of the risk analysis, the company concerned must develop a plan of measures in accordance with the new supply chain law, on the basis of which there is no longer any risk of human rights being endangered in the future. In extreme cases, this can cause the business relationship to be severed. However, that is not the declared aim of the legislature. Rather, according to the new Supply Chain Act, a solution should be sought on a case-by-case basis that corrects the existing trade relationship in a manner that preserves human rights. This can be done, for example, by a supplier proving that it will no longer employ minors in the future or that it has implemented ecological waste management.

As a third measure, the new supply chain law also extends the rights of those affected by human rights violations. In future, they will no longer only be able to assert their rights in German courts, but will also be able to lodge a complaint with the Federal Office of Economics and Export Control. In addition, the new supply chain law enables them to assert their interests by way of litigation before German courts with the support of German trade unions or non-governmental organizations.

New regulations on fines due to the new supply chain law 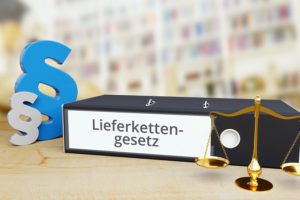 In addition to a catalog with the various duties to act, it is also stipulated that the Federal Office of Economics and Export Control (BAFA), as the competent authority, checks compliance with the Supply Chain Act 2023. In doing so, BAFA not only checks the company reports, but can also set sanctions for violations in individual cases. Companies that do not adhere to the provisions of the new Supply Chain Act no longer only have to expect damage to their reputation, but can also be subject to high fines, depending on the type and severity of the violation.

Who does the Supply Chain Act 2023 affect?

With a view to the increased administrative volume that the review of the supply chains entails, the new Supply Chain Act is aimed at least directly at those companies that, in the opinion of the legislature, can provide the corresponding capacities and that have sufficient influence on internationally branched supply chains. The limits here are strictly set and depend on the size of the company or the number of employees in a company.

The new supply chain law also includes companies with a branch in accordance with Section 13d of the German Commercial Code (HGB).

Is there a new supply chain law coming soon at European level?

In a communication from the Federal Government, the latter points out that environmental and human rights standards should be achieved in the long term through uniform Europe-wide legislation.

In fact, a European supply chain law is already being worked on in Brussels. The suggestions made there often go well beyond the rules of the German Supply Chain Act 2023, both in terms of content and personal scope. In future, not only large companies but also SMEs should be made responsible. In terms of content, the upcoming law will probably not limit its focus to human rights aspects. The issues of “environment” and “governance” are also likely to have their own regulations.

What exactly the European supply chain law will look like can currently only be speculated about. If it were up to the federal government, the Supply Chain Act 2023 could “serve as a blueprint for a European law”. It remains to be seen to what extent the Commission will play its part in this. In any case, companies are well advised not only to implement the provisions of the Supply Chain Act 2023 into their corporate structure, but also to gain a comprehensive overview of their supply chains in general. The later administrative effort should be kept as low as possible.

Regardless of whether you have specific questions about currently applicable regulations such as the new supply chain law or whether you would like to have a reliable partner at your side who will always support you in the future with environmental issues, we at Deutsche Recycling are always there for you. Simply contact us using our contact form.

Environmental compliance – a challenge for a good cause
9. March 2022

Austrian Battery Ordinance: New requirements for online stores from 01.01.2022
12. February 2022
Webinare
Interesting topics:
Search:
Latest from our Blog:
Go to Top
Do you have questions?