Germans see themselves as the world champions of recycling, and are also considered as such in most other countries. But a closer look proves that this is nonsense. The system doesn’t work all that well. One reason for this erroneous belief remains that, theoretically, a great amount of recycling could take place – whereas, in practice, proper waste separation has to take place first. Another reason is that not every type of waste can always be recycled to the maximum possible extent, with that offering the best possible profit for the recycling company often given priority.

E-waste is any waste with electrical components in it. It runs from battery-operated children’s toys through MP3 players to discarded televisions and smartphones. It also includes hair-dryers and kitchen devices, bathroom scales, lamps and similar, all of which are used electrical devices. While glass and paper make up 80 % of the waste arising in Germany and are largely not only correctly pre-sorted, but also actually get recycled, the situation with electrical waste is very different. Particularly, small used devices often end up in household waste. And this is not good, because household waste is incinerated. The raw materials contained in electronics are sometimes very difficult to obtain and are extracted and processed only with grave environmental damage. Why should they simply go off to be burnt? It would make much more sense to extract these raw materials – even at some effort – from the electrical devices and reuse them. So this can happen, e-waste first needs to be properly disposed of: it must not end up in household waste.

To make their way successfully through the tangle of international legal systems, many companies are now relying on professional service providers in the field of environmental compliance. These make sure the regulations continue to be demonstrably complied with, that is, that proper electrical waste recycling is taking place. It must be emphasised, here, that this is not about fulfilling burdensome obligations placed on various companies, but handling a task for all humanity that naturally generates high levels of complexity. For this reason, where environmental compliance is concerned, we offer you individual consultation relating to all the obligations you face and how to fulfil them in e-waste recycling. These include, alongside licensing and registration of electrical and electronic devices, reporting quantities and annual statistics and invoice inspection. Regardless of the economic benefits to your company from our insolvency-proof guarantees, we can also come together with you to make the world a better and more liveable place.

A potential form of registration you must carry out as a manufacturer of electrical and electronic devices is that of being listed by the “Stiftung Elektro-Altgeräte Register” (EAR for short). This is intended to ensure that products are properly disposed of. EAR registration and the accompanying electrical waste recycling is a requirement if you want to bring electrical devices to market at all. We will help you both with preparing and submitting the documents needed for EAR registration and in determining the device type of your product that is important for registration. Our EAR service covers both general registration and the drawing up of credible evidence of B2B dealings. 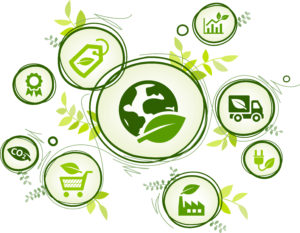 What options are there for e-waste recycling?

In 2008, only around 40 % of e-waste produced was actually sent to recycling centres. The rest was thrown away with household waste. There are e-waste recycling options in every recycling centre: there, the used devices are bought by companies specialising in the dismantling and separation of the materials they contain. Subsequently, the raw materials can be cleaned up and sold on to producers. Electrical waste recycling involves both a lot of work, but also a lot of money. It is often compared to a goldmine for a reason.

The second option for electrical waste recycling is to hand in used electrical devices to retailers. Electrical wholesalers and smaller specialists will accept devices and ensure they are sent on to recyclers. From complete computers to fans and desk lamps, anything can be handed in – even washing machines and other larger devices. However, it must be ensured that the devices are handed in to the wholesaler at the right location – and note: an old oven is not as easy to transport to e-waste recycling as a bicycle.

If electrical devices are still functional, they can be sold on as used devices – a good opportunity for e-waste recycling. A business often engaged in on the small ads pages of local newspapers or online can also be carried out via professional dealers. However, those wishing to do so often do not think about the resale value. As standard, the sale of a used device or toy to the dealer will likely bring at most 30 % of the resale value. In return, however, you really do get rid of the e-waste immediately and don’t have to store it in the basement for months looking for a buyer.

If electrical devices are no longer fully functional, they can often still be reused as part of e-waste recycling. Because individual components can make up a replacement parts inventory. It is only very rarely that the entire used device is defective. It is usually manufacturers that offer spare parts – but workshops and service providers often also do so.

E-waste recycling – all this can be recycled

Many different metals are used in old telephones, computers and other electronic devices. Gold, silver, copper and even platinum can be found there for recycling. But it’s not just the noble metals that are extracted from electrical components, but also cobalt (largely found in batteries), neodymium, dysprosium and other rare earths.

Separating the individual elements for e-waste recycling requires great effort. Some metals can be obtained from the slag produced by incineration, but it is better to take the devices apart first. Because plastics and some rare earths can no longer be extracted from slag, or may be rendered useless by the process. The plastic housing of devices is considered a useful combustible material in noble metal and copper recycling foundries. This is not environmentally friendly, but the plastics are made with additives and fire retardants that mean they cannot be recycled.

E-waste recycling is not always possible: Noble metals and copper can certainly be fed back into the cycle again and again, without losing quality. Other metals, like aluminium, are different. They are only able to be reused in alloys. And the slag left after the combustion of the final residues and numerous melting processes can only be repurposed as construction material.

A grave problem for e-waste recycling is mercury: So much of it is extracted from old devices that only a small proportion can be reused. What cannot be reused in energy saving lamps and other mercury-containing devices must be “safely” stored in old mines and at other locations. And that is expensive.

Electrical waste recycling made in France – the Triman logo

A potential model for effective sorting regulations in e-waste recycling is shown by the Triman logo. This informs the end user how to correctly dispose of a product at the end of its life. This labelling is obligatory and applies to products used in the private sphere and packaging provided to consumers by the catering industry. The advantages of harmonised labelling are clear – nevertheless, it is a big challenge for many companies. As a customer of ours, you will receive precise instructions on how to draw up the Triman logo so you can avoid any fines you might have to pay for incorrect use.

What is the best method of e-waste recycling?

In general, every form of e-waste recycling is good. Because if raw materials can be reused, it is more sustainable and environmentally friendly than new extraction. However, there are quality differences. It makes most sense to resell electrical devices for further use. They may need repair beforehand, but can get a new lease of life as second-hand devices. Only if this is impossible because of errors in components that prevent repair should the device be taken apart. But even then, individual parts can be used as-found for e-waste recycling. This also makes more sense than extracting the raw materials from the functional parts. Depending on what raw materials are contained in the device, the parts may need to be taken apart by hand before machine processing in shredders and furnaces. This may be cost-intensive, but it pays off. Because the prices of metals have been on the rise for many years, making e-waste recycling commercially attractive. Only a few hazardous substances from e-waste actually need to be sent for special waste incineration or placed in storage at a special waste dump.

The most important prerequisite for sustainable e-waste recycling is thus the correct disposal and return of the devices, which is a particular obligation of manufacturers and dealers. Deutsche Recycling offers help with e-waste recycling, the Packaging Regulation, the WEEE Directive and the Battery Act – in Germany, Europe or worldwide. Get in contact with us!

The German Electrical Devices Act: what are the rules?
29. June 2022
Webinare
Interesting topics:
Search:
Latest from our Blog:
Go to Top
Do you have questions?